The authors Mladen Bubonjić and Đordje Vujatović analyze the media image of the disintegration of Yugoslavia and the war and the dominant narratives in political and public discourse. The authors believe that three decades since the beginning of the war in the former SFRY and a quarter of a century since the end of the war in BiH, the process of normalization of relations in Bosnia and Herzegovina not only does not progress, but at certain moments does not seem to stagnate.

Thirty years after the start of the final decomposition of SFRY, it would appear that the situation in the society is the same, or at least, similar to the one in the dawn of war. Exclusiveness, unprincipledness, hypocrisy, relativization, generalization, intolerance, hatred, are more than present and they are eating out the already unhealthy social tissue of states on post-Yugoslav area, especially in Bosnia and Herzegovina.

Political discourse, dominated by intolerance and hatred, has become an integral part of narrative matrix, i.e. of a system of values in general, and according to the perpetuum mobile principle, without consuming a lot of energy, it endlessly continues to burden the public sphere. We cannot neglect the “discourse from the bottom”, that is, the prevailing narrative present among the population, which does not significantly differ from the “discourse from the top”, that is, discourse of political elites. They are mutually intertwined and conditioned, providing fuel to each other. However, greater guilt certainly lies with political elites who use the media to place the aggressive discourse, thus maintaining the state of latent intolerance.

Three decades from the start of the war in SFRY and a quarter of a century after the end of war in BaH, the process of normalization in Bosnia and Herzegovina is not only not progressing, but it seems at times it is not even stagnating, but actually regressing. Political elites, along with the population, are unable to reach a consensus about some basic aspects, such as, e.g. the character of war in Bosnia and Herzegovina. On the one hand, the nominally Serb option in BaH advocates the thesis that it was exclusively a civil war, while the, conditionally speaking, Bosniak side advocate that there was an aggression on BaH. In both cases, as well as in the case of Croat side, the armies and the peoples led defensive wars, and there is a persistence on this for the past three 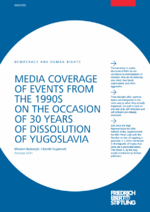 The Friedrich-Ebert-Stiftung (FES) is a non-profit German foundation funded by the Government of the Federal Republic of Germany, and headquartered in Bonn and Berlin. It was founded in 1925 and is named after Germany's first democratically elected President, Friedrich Ebert. FES is committed to the advancement of both socio-political and economic development in the spirit of social democracy, through civic education, research, and international cooperation. Friedrich-Ebert-Stiftung is the oldest political foundation in Germany.